Perpetual Vs Solvable Problems in Relationships 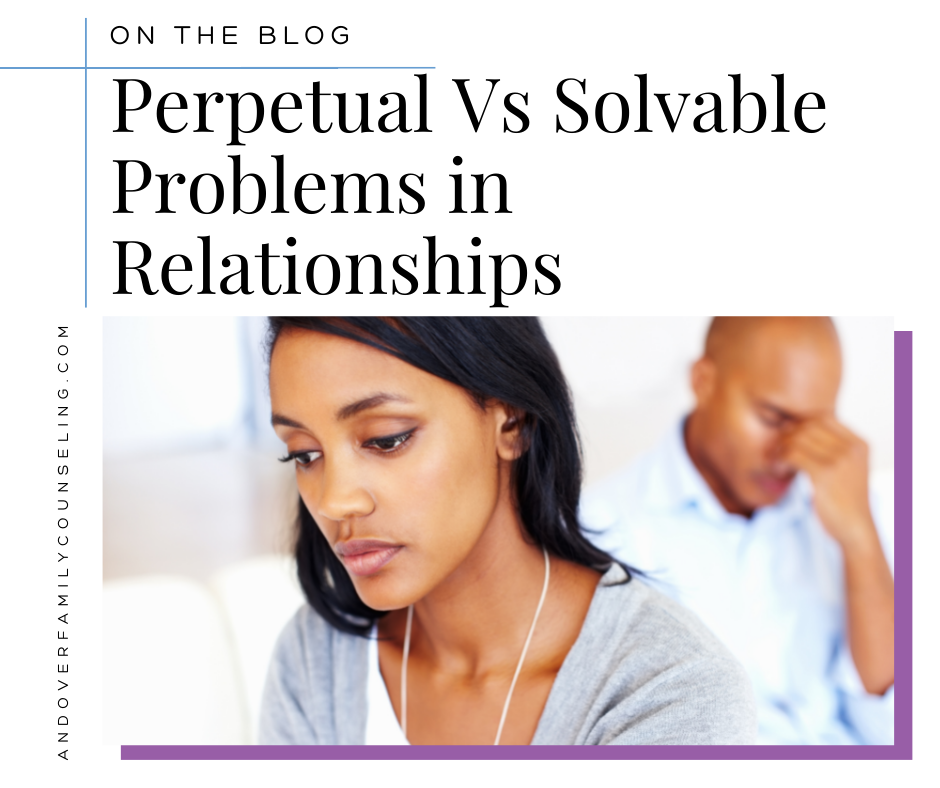 Perpetual Vs Solvable Problems in Relationships

Anytime we are in a relationship with another person, conflicts will come up. This is true if it’s a friendship, a romantic partnership, or even a coworker situation. Interacting with other people means that eventually, some friction is going to come up. Not all conflict is created equally, however. There are the fights about solvable problems, and then there are conflicts that come up repeatedly that don’t seem to have an easy answer. These problems are called perpetual problems. In romantic relationships, perpetual conflict can leave you feeling disconnected from your partner and emotionally vulnerable. You might feel like you and your partner just aren’t on the same page anymore, and you might even be questioning if you want to stay in the relationship.

When you think about your relationship, do you experience more solvable conflicts, or do you tend to find yourselves fighting about the same thing over and over?

Solvable conflict can be wildly frustrating, but once the issue is addressed, you will probably start to feel better. Solvable conflicts can be about things like housework, child discipline, different food preferences, family dynamics, etc. When couples are involved in a solvable conflict, there isn’t a deeper meaning behind each argument that needs to be solved. It’s just about the situation at hand, and once that’s solved, life goes on.

Perpetual conflicts, on the other hand, aren’t solved so easily.

These are fundamental differences between people. Perpetual problems can be issues of personality or lifestyle expectations or needs. Some topics that can turn into perpetual conflicts are finances, social life preferences, punctuality, sex, religion, and even housework. Housework was listed above as a solvable conflict, but it can turn into a perpetual conflict when the argument about housework isn’t only about housework. When the argument devolves into each person having to defend their personality + preferences, the conflict can become perpetual. Remember, solvable conflicts aren’t as deep as perpetual ones, so when the argument stops being about what’s on the surface, that’s when it can become unsolvable.

According to the research of Dr. John Gottman, 69% of relationship conflicts are about perpetual problems. Dr. Gottman’s work suggests that solving the problem isn’t actually what will stop the cycle of perpetual conflict. Instead, the way you approach conflict in your relationship is what matters.

Tips to keep in mind when approaching perpetual conflict in your relationship:

You both vs. the problem

When you discuss conflict in your relationship, approach it with compassion, understanding, and affection. Instead of imagining the conflict as the two of you versus one another, try to conceptualize it as you + your partner versus the problem. While perpetual conflicts aren’t going to be easily solved by a simple compromise, you can get to a place in your relationship where these conflicts aren’t totally derailing you emotionally.

When conflicts devolve into flat out arguments, it’s easy for contempt, criticism, and defensiveness to take over. Even though these conflicts are often about something deeper than what they seem, try to approach things in an affectionate and understanding way. Using humor can also help to defuse the tension so you feel more connected to each other as you approach the issue.

Don’t try to change their position – try to understand it

Instead of trying to change your partner’s mind on their position, use the conflict as a chance to understand where they’re coming from. Have them explain their thinking to you, and then offer to do the same. When we start to make assumptions about what our partners are thinking and doing, we miss out on an opportunity to effectively communicate and grow closer. Forcing your partner to change will just lead to resentment, which a whole different problem that will need to be solved.

Bring in outside support

Sometimes, you’ve done everything you can to work through perpetual problems when they come up, and you need extra support. Couples therapy can give you a space to process each of your perspectives with a neutral party. Therapy can also give you skills to practice outside of session for when conflicts come up.

If you’re experiencing perpetual conflict in your romantic relationship, know that there is hope. Often, couples counseling can be a great way to get to the bottom of these seemingly unsolvable conflicts. It will take some hard work, but it’s possible to learn + grow from the relationship conflicts we experience so the relationship ends up stronger than ever.